***Release Blitz*** WHATEVER YOU DO (Try Again, #2) by Stephanie Smith

How do you trust someone who is everything you’re trying to avoid? Harper Lindell is having a bad day. You know, if a bad day consists of getting fired from your cushy job and then catching your boyfriend red handed playing hide the salami. Sick of meeting the same guys over and over, Harper decides to try her luck at Internet dating. How bad could it be? Right? Tate Washington wasn’t looking to meet anyone. Still dealing with the consequences of his one serious relationship, all he’s interested in is revamping his family’s behind-the-times café. He didn’t plan on seeing the beautiful receptionist from Argo again, walking into his life to use his café as a dating hub, and using him as a BFF. Can Harper really trust Tate, who is everything she thinks she needs to steer clear of? Can Tate wait while Harper works through her insecurities and fears?

Tate chuckles as he picks up a tomato and throws it to me. Thanking my quick reflexes, I catch it mid-air. “Here, cut those,” he says, gesturing to the pile of tomatoes already stacked on the bench next to where he is preparing bacon. I pop the tomato down and head to wash my hands. Once I return to the counter, Tate approaches me with an apron and wraps his arms around me as he ties the strings in front. We get stuck into it and work in companionable silence for the next few minutes. “I’m sorry about the other day,” he says, not pausing for a second from the bacon he is cutting. “I know,” I respond. “I’m glad we’re okay.” “Me, too.” Silence descends once more, and we continue our tasks before Tate speaks again. “The other day, you said how you’ve never felt an instant connection with someone before.” “Yeah?” I ask warily, wondering if I freaked him out. “I didn’t get to tell you that I feel the same. When we’re together, it feels right.” “Yeah … it does.” Even though we don’t mention another thing about it, the silence doesn’t come again as the shots keep flowing and the music on the old radio gets louder and louder. We are laughing and carrying on and there is more ‘accidental’ touching on both sides. ‘Black Widow’ by Iggy Azalea and Rita Ora flows through the speakers and I sigh in happiness. “I love this song.” I leave my tomatoes behind to shake my hips all over the kitchen to the beat, singing along with the lyrics. Warmth covers my back as two strong hands land on my hips. Tate pushes into me from behind and moves his hips along with my own or forces my hips to move along with his—I’m not sure. “You’re so fucking sexy, Harper,” he whispers into my ear. “I won’t be able to keep this friendship platonic if you keep shaking your ass like that in my kitchen.” His warm breath flows over my collarbone as he nuzzles my neck and goosebumps break out across my skin. Tate must notice as he lifts his head and slowly peppers small, light kisses along the crease of my shoulder. My head rolls back onto his shoulder, and my body liquefies at the intimate and sensual touch. He’s breaking down my walls. My common sense. He’s slowly softening me, melting me so he can mould me as he pleases, and it’s working. As the realisation hits me, I jump out of Tate’s arms, grab hold of his hand, and pull him to the middle of the kitchen. I smile seductively at him and wink. “I’ll just have to keep you in line and focused then.” He throws his head back and laughs, allowing me to ignore the moment and lead him around the centre workbench as we shake, shimmy, and wiggle to ‘Shake it Off’ by Taylor Swift, which is now playing on the stereo.

Amazon US | Amazon UK
Brooke Willis had everything she ever wanted: a happy marriage, volunteer placement at the art gallery, and the promise of starting a family with the man of her dreams. Saxon Reed had everything he ever thought he needed: a successful career, nice cars, expensive apartment, and more money than he knew what to do with. After losing her husband Brooke insists on taking over his company to keep his dreams alive. Struggling in an industry she knows nothing about, Brooke turns to Saxon, her husband’s best friend and business partner, for guidance and support. Their mutual grief, and Saxon’s need to look after his best friend’s wife, creates a connection beyond just business. Can Brooke take over the company and find a new life without saying goodbye to the past? Can Saxon protect and care for Brooke without scaring her away? What happens when your heart doesn’t listen to your head? When lines are crossed and boundaries are pushed?

Website | Facebook | Goodreads | Twitter
I'm first & foremost a reader & fangirl, I will always be first & foremost a reader & fangirl. I am on street teams, I pimp and I brag. I LOVE my Authors!! I have recently started writing as a way to relax and spend some time for me. My first novel Wherever You Will Go is due to release later this year. I'm having so much fun writing my first story and I'm looking forward to the journey it is taking me on.

Email ThisBlogThis!Share to TwitterShare to FacebookShare to Pinterest
Labels: (Try Again, #2), Release Blitz, Stephanie Smith, Whatever You Do

Synopsis:
When Jacob “Dax” Daxton returns home from war, he has to fight a new battle – the one to find his place in the world. The man who normally has a clear path to victory surrounded by brothers in combat is suddenly lost and alone. After meeting Beckett Ridge, a bearded tattoo artist, Dax’s journey begins winding down an unexpected path.
Still reeling from events that shook his foundation, Beck has never been part of anything meaningful. Now faced with responsibilities foreign and daunting, Dax’s broken spirit mends Beck in ways he never even knew he was destroyed.
As both struggle to find balance, they are healed by the comfort they find in one other. On the other side of chaos, they hope to find themselves On Solid Ground. 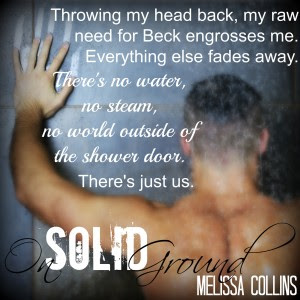 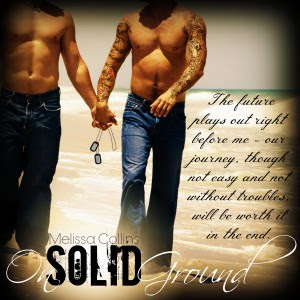 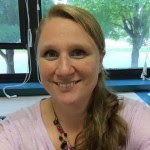 Melissa Collins has always been a book worm. Studying Literature in college ensured that her nose was always stuck in a book. She followed her passion for reading to the most logical career choice: English teacher. Her hope was to share her passion for reading and the escapism of books to her students. Having spent more than a decade in front of a classroom, she can easily say that it’s been a dream. Her passion for writing didn’t start until more recently. When she was home on maternity leave in early 2012, she read her first romance novel and her head filled with the passion, angst and laughter of the characters who she read about it. It wasn’t long before characters of her own took shape in her mind. Their lives took over Melissa’s brain and The Love Series was born.
Get up to date information on all Melissa's work by signing up for her newsletter here. You can also find her on these sites:
WEBSITE | FACEBOOK | TWITTER | GOODREADS
Posted by All Is Read at 10:00 AM No comments:

Book #5 of the bestselling Consequences series

Secrets and deception
As the pieces of their puzzle come together, Anthony and Claire Rawlings continue to defy the odds. Together they overcame an incomprehensible beginning. Apart they endured unimaginable heartache. Reunited with family and friends, their journey continues as they navigate a dangerous world where secrets threaten to destroy what they hold the most dear.

Passion and love
Tony and Claire turn up the heat as sparks fly, passion rages, and love prevails. With only a dark glance or devilish grin, the fire that sparked in an isolated suite, continues to burn. Though no longer willing to be less than Tony’s equal in life, behind closed doors only one man makes the rules.

Choices and consequences
The safety of the Rawlings family is not debatable, and only Phillip Roach can assure that they are not disappointed. Learn how he leads old friends and new associates through the dangerous world of delusion and revenge. The choices he makes for both the family and his personal life will have consequences.

Theirs was a long, complicated story with a monster and a knight. What made their story unique was that these two players were the same person.—Aleatha Romig, CONVICTED

Aleatha Romig is a New York Times and USA Today bestselling author who lives in Indiana. She grew up in Mishawaka, graduated from Indiana University, and is currently living south of Indianapolis. Together with her high-school sweetheart and husband of twenty-eight years, they've raised three children. Before she became a full-time author, she worked days as a dental hygienist and spent her nights writing. Now, when she’s not imagining mind-blowing twists and turns, she likes to spend her time with her family and friends. Her pastimes include reading and creating heroes/anti-heroes who haunt your dreams!

CONSEQUENCES, her first novel, was released August 2011, by Xlibris Publishing. Then in October of 2012, Ms. Romig re-released CONSEQUENCES as an indie author. TRUTH, the sequel, was released October 30, 2012, and CONVICTED, the third in the series, was released October 8, 2013. Unexpectedly, the fourth book of the Consequences series came to life with REVEALED: THE MISSING YEARS. It is the fourth full-length novel in the series. It explores the years in CONVICTED that previously were only mentioned, as well as a complete character glossary and timeline. REVEALED was released May 20, 2014. BEYOND THE CONSEQUENCES, book #5, will be released in 2015. Yes...MORE Tony and Claire.

Aleatha also wrote reading companions for the Consequences Series. BEHIND HIS EYES CONSEQUENCES (Book 1.5) and BEHIND HIS EYES TRUTH (Book 2.5) are currently available for those times and scenes when the readers asked, “What was he thinking?” These companions also contain never before released behind-the-scenes scenes.

Aleatha is a “Published Author’s Network” member of the Romance Writers of America and represented by Danielle Egan-Miller of Brown and Miller Literary Associates.

YOU DO NOT WANT TO MISS THIS!!