All she needed was a job…
The last thing twenty-four year old grad student Angie Roberts needs is to worry about her new boss’s father. After all, she’s never even seen him. He remains sequestered upstairs in a house that looks like it should be the main feature in an episode of Hoarders. She had no idea the house was such a dump when she took the job. But she’s concerned about the safety and health of the old man living under such horrid conditions.

What she got was a mystery…
Despite warnings not to venture upstairs, she wanders up to the second floor. What she sees is shocking. The man she finds is a gorgeous, sexy, middle-aged man-- and he's stepping out of the shower. But something is definitely not right. Why would this wealthy, handsome man live in a house in such disrepair while his nine-teen year old son resides in a lavish penthouse? Why does he hide away from society? Why does he come to her rescue and then run away?

What she discovered was heartbreaking…
Angie learns that forty-four year old Grayson Whitmore suffers from schizophrenia. Paranoid, he retreats into his own world.

Nursing Grad student Angie is trying to make ends meet and as odd as it may seem she answers an ad to clean a house. When she meets with Charles (he’s such a little sleaze bag if you ask me!) she is told that it is a hoarders house and that she will be going through his father’s stuff.

The only rule is that she can’t talk to the man that resides upstairs!!  Well that only sparks Angie’s curiosity but tries her hardest to follow the orders but it gets the best of her and she just can’t help herself and needs to find out who he is. Grayson is Charles’ father and is an amazing man who suffers from schizophrenia who has hidden himself away from the world. He starts to find himself just as curious about Angie as she is about him.

It has been said that opposites attract and it is no different for Greyson and Angie. He believes he lost everything when his wife passed away and Angie is determined to bring him back into the world. They are equally attracted to each other and slowly they start to develop a beautiful relationship. Will they get to the happy ending that Angie hopes? Grab a copy of this book to find out, you won’t be disappointed!

I was on board for this book from the minute I read the Synopsis…..And wow am I glad I took the trip! This was an amazing story that touches upon what mental illness can do to a person while at the same time showing that love can help and save someone from themselves. I loved the way Lisa wrote these characters and with not having a lot of secondary characters you really got to know Grayson and Angie, which in my opinion was perfect for a story of this kind. They are a sizzling hot couple and the drama mixed with the humor they both have just sucks you in!  I’m hoping that we will see more of these two since I was already looking for more once I had finished the book.

Early Sunday morning, I crawled out of bed in search of Grayson. I discovered him upstairs in the room with the books. They were piled all around him as he scratched at something on the floor with an old shovel. The room was saturated with an early morning chill, so thick I could feel it seeping through my skin. I hugged my torso, scrubbing my palms up and down my arms. I approached him hesitantly and asked what he was doing. My heart was in my throat because I never knew what to expect with Grayson. He stopped and leaned against the handle, his cloudy gaze finding my face. He was fully dressed. He must have gotten dressed again after we’d made love earlier.
“Digging,” he acknowledged casually. “Digging a trap.”
I swallowed hard, emotion stacking like bricks in my chest. I shook my head, my mind grasping for purchase, trying to understand. “A trap for what, Grayson?”
“Danger. I have to be prepared. I have to protect us.”
I reached out a hand, trying to keep it steady. “You’re safe, Grayson.”
His gaze shifted to my proffered hand, but he didn’t move. He didn’t believe me. Fear and skepticism drew a roadmap of worry on his face. His jaw squared and he tightened his lips into a brittle line. I watched his body uncurl as he grabbed the shovel and silently started scraping at the floor again. That’s when I saw it. There was a large, jagged crater in the dusty wood that must have been covered up by the scattered books. It was directly over the small cracks I’d seen in the ceiling downstairs, the network of spider veins I’d noticed soon after starting here. I wondered how long he’d been working at this trap. I could already see exposed beams and fluffy insulation. If he kept this up, eventually he’d put a hole right through the wood floor.
“Go back to bed, Angie.”
“I’m not going anywhere. I’m staying with you, Grayson,” I said sternly, plopping myself down on the floor next to him.
He stopped again and stared at me, his blue eyes almost cobalt in the gray dawn. His hair was a loose mane framing his face, giving him an unruly look. “You’ll be tired. You haven’t gotten much sleep.”
I squeezed my eyes shut, hurting, thinking of the reason I’d been up most of the night. We’d held each other, made exquisite love, bathed in a temporary utopia where I could pretend he was okay.
But Grayson wasn’t okay, and as I spent more time with him, I realized the extent of his fractured thoughts. My Grayson was funny and brilliant. My Grayson was tender and passionate. My Grayson could melt my heart with the tiniest smile. But this man, too, was my Grayson, a man who was sometimes out of touch with reality, who lived in the distorted world concocted by his brain. It was a world of doubt, fear, and distrust.

Lisa Eugene began writing as a way to mentally escape from the hectic medical world where she has been a practicing nurse for over twenty years. After publishing her first novel, STRICTLY BUSINESS, she quickly learned that readers couldn't get enough of the world she created and now she lives out her wildest fantasies by writing steamy romantic suspense for her fan-favorite Washington Memorial Hospital series.
When she's not plotting her next dangerous, fast-paced, sexy adventure, you can find her juggling a full time job, playing soccer mom, or curled up reading a good romance.

<*>Release Launch<*>The Rocker Who Cherishes Me by Terri Anne Browning 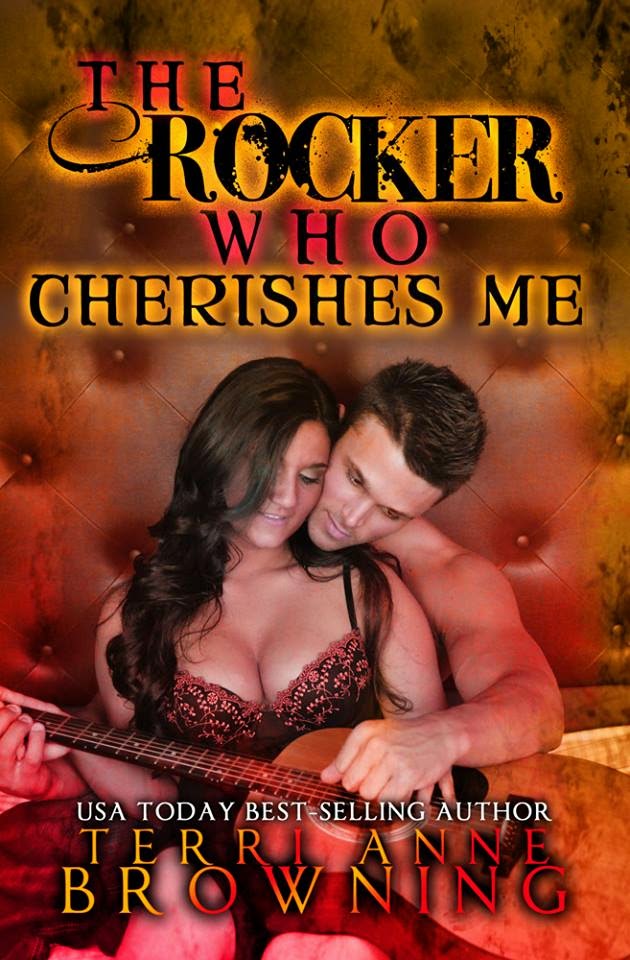 The Rocker Who Cherishes Me

The marines took me from a Tennessee farm boy and turned me into a hard man. Between the things I’d seen during my tour of duty and the things I’d done during my years as a member of OtherWorld, nothing could faze me. Nothing.

She’s everything that is good in the world. At least, my world. Everything I’ve ever done has been for her. Always for her. I feel as if I need her to breathe, to feel alive. But I can’t have Marissa. She’s to innocent, to damn perfect. And me? I’m not good enough for that girl. She deserves better, someone who would spend their life CHERISHING her. Not breaking her heart.

Between my brother and Wroth Niall I’d been protected from the world for most of my life. You would think I was still a little girl the way they treated me. But I wasn’t made out of glass. It would take a lot to break this girl. Because if a childhood cancer hadn’t kicked my butt, nothing would. Right?

All I’ve ever wanted was for him to look at me. Really look at me and see that I wasn’t a fragile piece of porcelain that would break if he touched me. What I got was a lot more…but nowhere close to enough. Once I touched heaven—at least heaven for me—and now I didn’t know how to go back to what Wroth and I had had before. I can’t go back to the life I was living before my short time with Wroth. It would destroy me to stay that close, when I know that I’m not what he really wants. So when my brother asks me to go on tour with him yet again, I decide to jump on that tour bus without a backwards glance.

Only I wasn’t prepared to be stuck on HIS bus.

She was out on the dance floor with a glass of something fruity in one hand and her other hand wrapped around Rhett’s arm as she danced between him, Natalie and Linc. I slammed my now empty bottle of beer down onto the bar top, making Emmie who had been standing close by jump. But I didn’t think to apologize. My mind was cloudy but focused on only one mission.

“Fuck, why am I the only sober one when he is suddenly shit faced?” I thought I heard Axton whine behind me.

Was I shitfaced? Maybe, but I didn’t care.

As I strode toward my girl someone stepped in front of me, but I pushed past him, not caring if I knocked the man on his ass or not. As I drew closer Natalie and Linc stopped dancing and Natalie took a few steps back, pulling Linc with her. After a small hesitation she reached for Rhett and tugged him back with her and the muscle head. Marissa, oblivious to her friends’ desertion and my approach continued to sway to the soft music with her eyes nearly closed.

My buzzed mind decided to take advantage of her like that and I wrapped my arms around her from behind. My hands folded around her waist and I lowered my head even as she stiffened in my arms. Burying my nose in her neck I inhaled like a man deprived of oxygen would take in lungful after lungful of fresh air. Dallas had been right earlier. Marissa’s shampoo did smell good. It was something different from what she had once used, but it smelled delicious and made her hair soft and shiny.

Marissa tried to turn in my arms but I tightened my hold around her waist, locking her in place against me. As if it had developed a mind of its own, my tongue snuck out and tasted the soft skin under her ear, rewarding me instantly with a shiver that she was unable to contain. Around us everyone else disappeared and I swayed to the music with her. I didn’t dance, but if it meant I got to have her in my arms then I would do the fucking Macarena

A NOTE FROM TERRI:
Having had a passion for reading from the time my aunt first handed me my first romance, I slowly grew bored with just reading. I wanted to control the characters, make them into who I wanted them to be and that way I was never disappointed with the endings. I soon learned that it isn't always that easy. The characters control the author. But that is all part of the fun when creating a new story. Seeing where these people take you on their journey to find their soul-mate has become my new passion and getting to incorporate my love of music--Rock music in particular--has been a dream come true. Thanks for taking this crazy ride with me, and I can't wait to see where we go next!