Adjust. Adapt. Accept.
But never give up hope.
Falling…
Falling…
Falling…
When eighteen-year-old cousins, Julie and Mary Anne Adler, are plummeted onto a grassy field surrounded by a post-apocalyptic world, they have no idea where they are, or how they got there. In this unfamiliar wasteland run by a group of refugees called the Sector, the girls search for answers.
But things get complicated when one of the men in the Sector finds himself enamored with Julie. Despite Julie’s own feelings toward him, she knows she and her cousin must return home. Now it’s up to them to find a way to escape this strange and isolating place…
Or die trying.

We stand and look around. We're on the edge of a plot of land about the size of a football field, and three-quarters of the edges are lined by a chain-link fence. A large stone wall surrounds the field beyond my view. No mountains. The road, only several feet in front of us, leads three different ways, yet something in my brain is pulling me back to the other end of the field. I turn, hoping to see a sign that will let me know where we should begin. In the distance stands the skeleton of a rusty old water tower flanked by the remnants of what I can only guess was once a typical town.
“Do you see my car?” Mary Anne asks.
I shake my head. Just as I move to take a step, a loud whistle sounds off, followed by sirens, and my body jumps in surprise. Two vehicles round the corner and charge straight for us.
Mary Anne stiffens when she sees them, her hands covering her ears from the deafening sound.
“Run!” I scream, reaching for her arm, but she refuses to move.
The sirens cease, but the engines rev louder as they pick up speed. I can’t leave her, and they’ll easily catch up to us before we even make it halfway across the field. Several men holding guns come into view.
One man’s raspy shout to, “Get down!” thunders out above the engine. “On your stomach!”
Mary Anne and I glance at each other, her wide eyes mirroring my own fear as we drop to our knees. With my forehead pressed against the cool ground, my aching body is the furthest thing from my mind. Tires are crunching on the street just ahead before they come to a stop, and I know they’ll be here soon.
We shouldn’t be here.
I hear more shouts and voices raised. Lifting my head slightly, the two modified vehicles looking straight out of a Mad Max movie stand before us, four men in each, all carrying firearms. All eight of them jump out and start walking toward us.
“Get back down!” one of them shouts from the road. I quietly resume my place with my head down.
“Well, well, what do we have here?” I hear a smile in this guy’s voice.
“Stand up,” a third man gruffly commands.
I hear movement from Mary Anne’s direction and realize she’s doing what she’s told, only now I’m too scared to stand. “Can you help us?” Mary Anne stammers. “We need to get back to our car.”
She’s asking them for help? My first instinct is that they are foes, not friends, but I hope she’s right, even though Mary Anne has never been great at reading people.
Footsteps approach. “Get up, girl,” the gruff voice demands again and nudges my leg roughly with his boot.
A small pain from my leg strikes up my body, and I try to ignore it as I slowly rise and observe the men several feet away on the pavement, ready to raise their weapons. I immediately notice they are all wearing matching dark shirts and dark pants tucked into combat boots. The uniforms giving away that they’re military of some sort, along with the guns, worries me that we might be in trouble for unknown reasons. Trespassing?
The gruff man who nudged my leg is standing directly in front of me on the grass, examining me as though I’m an alien. His salt and pepper hair frames his face perfectly, and his sullen eyes give me the impression he’s seen hard times. He appears to be older than my own grandfather, yet I’d have to place my bets on this guy if the two of them were to ever get into a fight. I’ve never seen an older man in such great shape.
I shift my sights back to the grass and concentrate on squishing my toes into the soaked bottoms of my sneakers.
“They’re just girls,” I hear the guy with the smile in his voice say from somewhere in the background. He steps out and stops when he sees me, blinking a few times before his gaze moves to Mary Anne and then back to me again. I feel like cattle on sale as all the men quietly examine us.
“You know as well as I do that girls can cause just as much damage as men,” Gruff responds as he moves to Mary Anne, his husky tone booming in the open air.

Bria Starr grew up in a small town in Minnesota and continues to live there with her husband and two kids. She’s a stay at home mom who is very close with her family, loves junk food, and is always cold. Her favorite things include reading books, writing, listening to music, and watching too many movies. 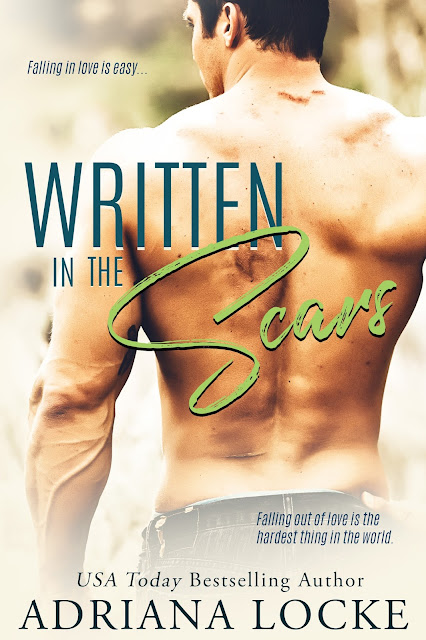 Falling in love is easy.

Falling out of love is the hardest thing in the world.

And Elin and Ty Whitt are terrible at it.

The first time the local basketball star smiled at Elin, she was a goner. It was just so damn easy to fall for the dark-haired hometown hero with his charming smile and strong, athletic build.

Thousands of sleepy smiles, aimless drives down country roads, and squeaks of the backdoor after a swing shift later, reality hits. And it hits hard. Falling in love was definitely the easy part. Watching it break apart was impossible.

Through the tears, the second-guesses, the memories of a life built together, the world keeps spinning. With each turn comes clarity and hope—sometimes in the form of a pair of muddy boots by the back door or from the words of a wise friend.

When Ty shows back up with a new found determination to put his family back together, Elin's torn between the fights of the past and the possibility of a new start. This is the man that holds her heart, the man she loves beyond anything else. But this is also the one person in the world that can cause her the most pain.

Life’s not always easy. Love’s not for the faint of heart. But with life comes lessons and Ty and Elin have the scars to prove it. But it's their love written in those scars that will hold them together … or break them apart.


Sign up to receive an email from Adriana
on Release Day! 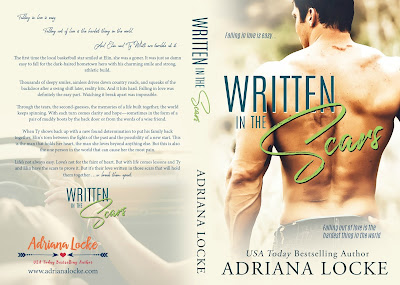 For sneak peeks, giveaways, and more, please join Adriana's Facebook Group, Books by Adriana Locke, or her Goodreads group, All Locked Up. 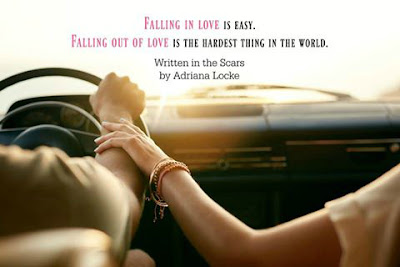