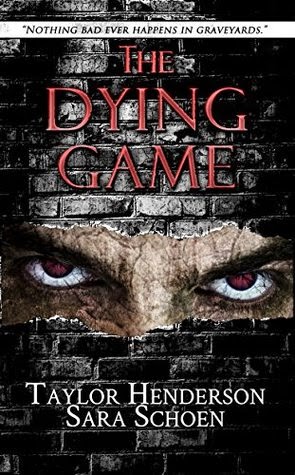 Follow the Tour
Synopsis
When Matthew Hastings finally has the opportunity to travel to the place that he's dreamt of visiting for years, he won't let anything stop him.
Not the ghost stories.
The hauntings.
Or even the fact that his pessimistic girlfriend has threatened to break up with him if he goes. In fact, it only makes him want to go more.
Then when he finds out that his childhood crush, Kelsey Hendricks, is going to be attending with his closest friends, nothing will stop him from leaving.
Now is his chance to tell her how he really feels. But will he get the chance? When a series of events traps the group underground in the tunnels of New Orleans, they soon discover...
They're not the only ones in the tunnels.
And they must find their way out by sunrise, or they will all be submitted to the horrors of...
The Dying Game.
Purchase Links
Amazon US
Amazon UK
Amazon CA
B&N
My Review
There were some minor things in the beginning that had the story off to a rocky start. The book begins a bit slow and some of the introductory scenes with the characters come off slightly juvenile, however once the story hits New Orleans its a completely different ball game and it definitely picks up.

Matt, Kelsey, Garrett and Ash all decide to take a vacation down in New Orleans. A place all of them are excited to visit. Garrett and Ash are lovebirds while Matt and Kelsey are still tip-toeing around their hidden feelings for each other. The characters in this book are very simple and I mean that in a good way. There isn't much angst with this group of friends. They all wear their emotions pretty much on their sleeves and there is no real heartache for the reader in trying to decipher their motives, thoughts, and fears. These characters are upfront and honest and its actually quite refreshing. They are easily relatable and it allows the reader to focus on the actual threat that lies ahead for them. The Dying Game.

Once the game gets going this book turns into a heart-racing, non-stop, white knuckle clutching thrill ride into hell. The trials, riddles and horror that Schoen and Henderson invent in this story are unfathomable and terrifying. It's the stuff nightmares are made off. This book delves into so many concepts to include fear, humanity, sacrifice and survival. This band of friends are put through a series of events that will push them past their breaking point and change their lives forever.

I thoroughly enjoyed reading this book in heightened anticipation of what would happen next. It kept me entertained and excited all the way to the end and it is a great read for those who love the horror/suspense drama.

Meet the Authors
Sara Schoen
My name is Sara, I’m twenty years old, and I was born and raised in Northern Virginia. I have always been interested in writing, even started a book in elementary school, but it wasn’t until high school that my friend, and writing partner, more or less forced me to join an amateur writing site. After some convincing from her, I plucked up the courage and posted one of my stories. While it wasn’t popular at first, I was shocked and overwhelmed by the support of readers on Wattpad, and they gave me the support and confidence to get where I am today. I continued to write religiously for the next three years I was on the website, starting countless stories and deleting a few others. It wasn't until I was nineteen that I was given the opportunity to work with a publisher, and I'm excited that I now get to share my work with countless other people as well as continue to write for the fans that supported me to continue working toward telling the world a remarkable story.

Taylor Henderson
My name is Taylor, and I was born and raised in Northern Virginia. I have been an adamant reader and writer for as long as I can remember. Writing has been a huge part of my life since I was able to even grip a pencil. Now I am twenty years old, and nothing has really changed. I am still a resident of the state for lovers, and I still use writing as my main form of expression. I love the idea that with a few words, all put together in perfect order; I can create a world of my own. I have the ability to create characters who have special talents that I’ve always wanted, or even situations that I’ve never experienced in real life. Writing is the only activity that I seem to excel at. It’s my escape from my average life. A place where I can be who I want to be, go places that I’ve never been, and meet people whom I’ve only met in my dreams. Isn’t that what writing is all about? Finding an escape into another world? Because let’s face it, the world we live in today is crazy, and uncontrollable. I like being in control. I just want to write my own story.