We are pleased to bring you the next cover from the
Tales from the Dark Side Series. 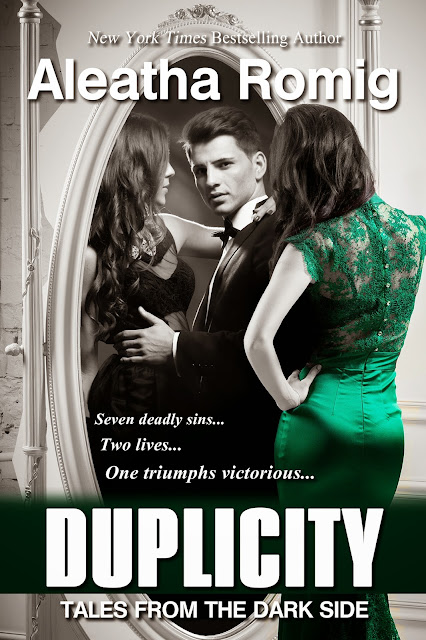 ADD TO GOODREADS
PRE-ORDER ON iBOOKS 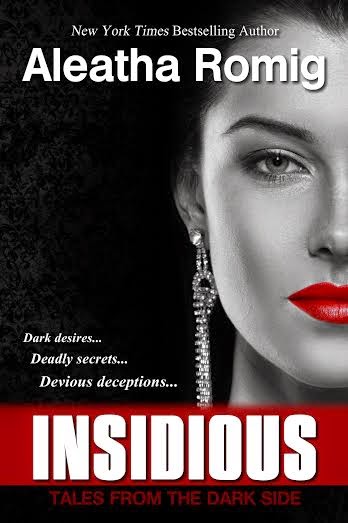 When a powerful man is willing to risk everything for his own satisfaction, only one woman can beat him at his own game: his wife. Or so she thinks…

“Let’s start with you calling me Stewart. Formalities seem unnecessary.”

Stewart Harrington is rich, gorgeous, and one of the most powerful men in Miami. He always gets what he wants. Anything is available to him for the right price.

Being the wife of a mogul comes with all the perks, but being Mrs. Stewart Harrington comes with a few special requirements. I’ve learned to keep a part of myself locked away as my husband watches me submit to his needs. But the more he demands of me, the more beguiled he becomes and that’s to my advantage. So I keep fulfilling his fantasies and following his rules because he doesn’t know that what he’s playing is really my game. And winning is everything, right?

INSIDIOUS is a stand-alone novel and the first Tales from the Dark Side title by ALEATHA ROMIG.

**Due to the dark and explicit nature of this book, it is recommended for mature audiences only. **

Aleatha Romig is a New York Times and USA Today bestselling author who lives in Indiana. She grew up in Mishawaka, graduated from Indiana University, and is currently living south of Indianapolis. Together with her high-school sweetheart and husband of twenty-eight years, they've raised three children. Before she became a full-time author, she worked days as a dental hygienist and spent her nights writing. Now, when she's not imagining mind-blowing twists and turns, she likes to spend her time with her family and friends. Her pastimes include reading and creating heroes/anti-heroes who haunt your dreams!

Are you ready for a different kind of love story?
Meet Michael & Laine in this Hollywood themed second chance romance by CD Reiss!

I am not hurt.

He can throw my camera off a balcony, and nothing has to change. We can stay king and queen of the same city, and different worlds.

Except this is Hollywood, and here, anything can happen.

Excerpt
I stroked his hair, waist deep in peace, all worry gone for the moment, and floating in no more than an ocean of gratitude. I must have been more vulnerable than I realized, or he’d reopened some wound with his kindness, because though my sweet reverie stayed, as the minutes passed, a layer of need fitted itself on top of it.
I needed to tell him, if not the details, the outlines of who I was.
“I want you to know,” I whispered, starting somewhere small, then everything I didn’t want to say spilled out. “I have stuff. I’ve never been to jail, but you know, it’s stuff, and it’s ugly, and it scares me. Because, I mean, you’re so perfect, and I’m… I’m just a mess. I’m not whole. I’m a bunch of pieces of a person I cobbled together.” My eyes got wet when I thought of the comparisons between us and that picture in my silverware drawer. “So if you have to move on when you realize that, I’ll understand. You have an image, and if anyone understands protecting a career, it’s me. I mean, I’ll be mad, don’t get that wrong, but also.” I swallowed and blinked, shifting my head so he wouldn’t feel the tear on his forehead. “I won’t blame you.”
I waited for an answer. Anything. A change in position or a word on any subject. The weather. Sports. Something. But all he did was breathe.
I smiled so wide, tears fell into my mouth. He was sleeping.

ABOUT THE AUTHOR
CD Reiss

NOTE FROM AUTHOR
I am so happy with the response to Shuttergirl, and I cannot wait to send Michael and Laine out into the world, because who doesn’t swoon over a second chance at love?
It’s a new genre for me, and I’m exploding with excitement, so I’ve dropped some fantastic reasons for readers to get the book right away.
TREAT YOURSELF LIKE A MOVIE STAR!
$500 Spa Gift Card
If you could get an hour, or ten away from the daily grind of paparazzi and interviews (or the job and kids), what would you do?
Get a foot rub/slash/pedicure? A massage? Maybe something called a Sleep Treatment that right now sounds better than sex?
Maybe you’d bring a friend or two, or maybe you’d just get a manipedi when you wanted one. Because the life of a megastar ain’t for the weak-willed or lazy, and running from paparazzi can really wear down a girl’s nails.
Woodhouse Spas are no joke. They’re all over the country and they’re….sigh. Fabulous. But if you don’t live near one, we can do Burke Williams, Halcyon Days or Red Door.
HOW TO ENTER
Take the fun SHUTTERGIRL READER QUIZ!
The link to the quiz is in the back of the book, and yes, that’s the ONLY place to find it! There are bonus questions relating to Jonathan and Antonio for extra prizes. You have until June 3rd to enter! That gives you a solid two weeks to read the book and get your chance at a $500 movie star spa treatment!
If you are a paperback reader, email me and we’ll work it out.
Posted by All Is Read at 11:00 AM No comments: