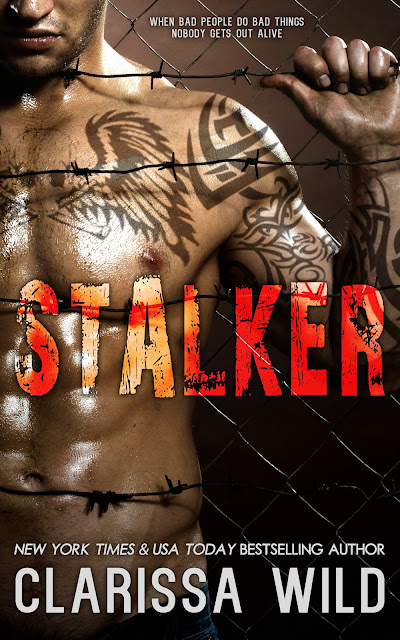 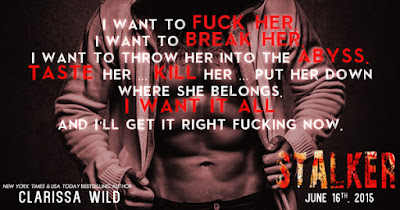 Stalker. What is it about that one word that immediately makes me jump up and with my hand in the air, waving, saying, “Me, me. I want to read this NOW!” Well Clarissa Wild’s Stalker is indeed rooted in some deep, dark content. Twisted from being emotionally neglected as a child Phoenix grows up to be one dangerous, scary hitman for hire. But he always wasn’t a damaged soul. There was a time when he had rays of sunlight to brighten his days. Those points in the day belonged to Vanessa. The little girl who grew to become his only friend. The one to become his love unconditionally. There’s just one problem; Vanessa is also the one that hurt and neglected him the most. And Phoenix will be true to himself by doing what he does best…

Yes Stalker will take you into a world where no one is who they seem and not all actions are black and white. Stalker has a gentle flow that charismatically leads you, the reader, by dual first person point of views while flawlessly injecting flashbacks that serve as a timeline to the backstory of Vanessa and Phoenix. Who they were, who they are, and who the will ultimately become. Clarissa Wild does all this writing magic so fluently that you don’t get lost in dialog or can’t help but fall for the main characters, and even start rooting for them! By the end of the story you’ll be just as surprised as I was while enjoying every moment of it!

There is also a prequel to Stalker, KILLER, that was in an anthology which gives the reader a more in-depth backstory to the root of all this dark and twisted plot! Just be warned, both Killer and Stalker are just as equally hot and sadistic as they are suspenseful so if you are a bit on the squeamish side or don’t like to lose your sunshine and rainbows I’d head the warning before continuing. But if you’re like me and love to feel new things, then go ahead and grab these babies and enjoy!

First, I need to say, I absolutely love Dark Clarissa Wild.  After reading the prequel, Killer, I *could NOT* wait to read this story.  And boy, did Clarissa deliver.  All of my dark readers out there will love this book!  Clarissa does a magnificent job of weaving this dark twisted tale together, at times making me set my kindle down for a breather, only to pick it back up again seconds later because I had to know what was going to happen!
We get to see both characters thoughts, because it is written in dual POV, and I love that.  I love seeing what is going on inside the minds of both MC’s at pivotal moments of the story.
I also love how Clarissa goes back and forth from past to present.  We get glimpses of the past where Vanessa and Miles (Pheonix) didn’t always hate each other, and we get to see what happens when their love turns to hatred.
Both Vanessa and Miles came from messed up backgrounds.  Miles didn’t have a chance, he was abandoned, didn’t have good foster parents, and the children around him bullied him.  Vanessa’s mother was evil and at every turn was trying to make Vanessa into the spitting image of herself.
Miles pretty much stalks Vanessa.  She has betrayed him, over and over again, and was the cause for his prison sentence.  And he needs to get revenge and nothing is off the table.

Frowning, I walk toward the door and notice it’s been left open. Outside are red drops scattered across the floor. I lean forward, so I can scour the premise, and that’s when I notice the pool of blood lying on the porch.
My eyes widen and I scream.
Stumbling backward inside the house, I slam the door shut with shaky hands.
That blood, is it Arthur’s? What’s going on? Is he here?
Shit, I knew it.
I immediately reach for my umbrella stand and fish out the rifle hidden behind all the umbrellas. I should’ve prepared more for this day, but I didn’t think it would arrive so soon. I lock and load the rifle, turning around quickly to surprise my attacker.
“Show yourself, you motherfucker,” I scream. “I know it’s you.”
“Hello, Vanessa ….” His voice brings me chills to the bone. “Long time, no see.”
“Get the fuck out of my house!” I yell, turning circles.
The voice is coming from everywhere, and I don’t know where he is. If I move, I’m afraid he’ll catch me.
All I hear is vicious, uncontrollable laughter. “Did you miss me? No need to be angry, I’m here now.”
“What do you want?” I scream.
“Oh … you know exactly what I want.” The grim harshness in his voice makes me tremble. “I told you that I’d come for you. Ready or not, here I come, Princess.”
“No! Stay away!” I scream, turning to the hallway. I could swear his voice came from there.
But there’s nothing to be seen.
Nothing except the filthy boot prints on the wooden floor behind me, leading into the hallway to the right.
I follow the trail into my living room, holding out my gun, ready to shoot if I must.
But then the trail suddenly ends.
My lips part in confusion as I wonder where in the hell the dirt has gone. I can’t find the boots anywhere. And then I realize what’s going on.
Too late.
Something is pulled over my head, pulling me into the dark. A bag.
His hands twist and twist until I choke. The gun drops to the floor. He’s suffocating me, and no matter how much I claw at the bag, it won’t break.
The last thing I hear before I pass out is, “Playtime is over. You can’t hide, Princess. Now you’re mine.” 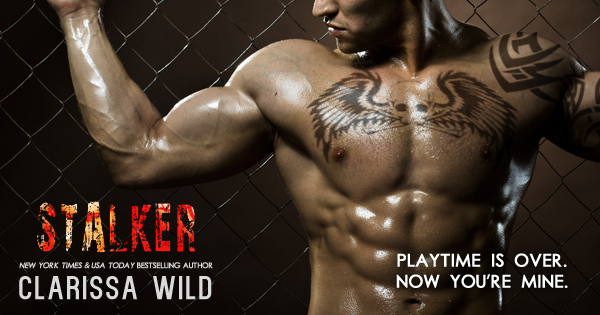