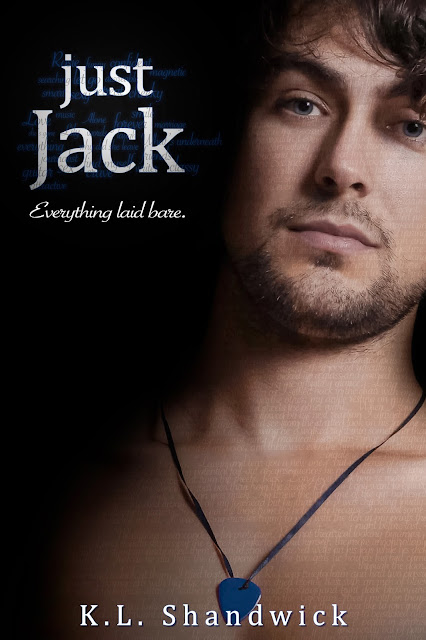 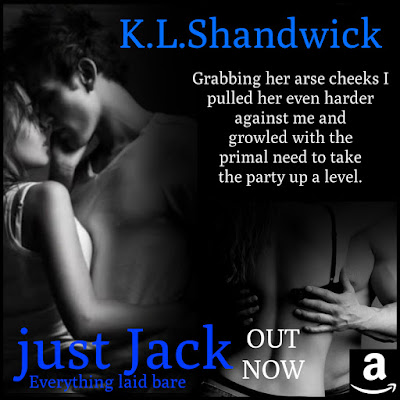 Being Lily Parnell’s best friend was effortless for Jack. Growing up together, Jack loved Lily and was fiercely protective of her and for most of his life all he wanted was to make her happy. When she was happy he was happy, except Lily lived a world away from him now and Jack missed her dreadfully. As far as Jack was concerned there had never been a time in their lives where they hadn’t shared everything. In recent years Lily’s ambitions took her overseas and even with an ocean between them, Jack still managed to support his best friend. One day things changed everything between them and their relationship began to shift. Lily was carving her own life and after observing a scene involving her, it made Jack take a close look at his own. Feeling confused, Jack decided to take a difficult decision never realising the potential fallout from doing something he felt was the right thing at the time. With his life laid bare Jack and as a simple, uncomplicated guy he thought he had things finally figured out. Women loved Jack and they came and went in his life apart from Lily. She was always there, until one day she wasn’t. Jack felt betrayed and abandoned by the one person who he thought he could rely on no matter what. During his journey from that moment on Jack faced more separation and loss than he could ever have imagined how would it shape him both as a man and can he forgive her? 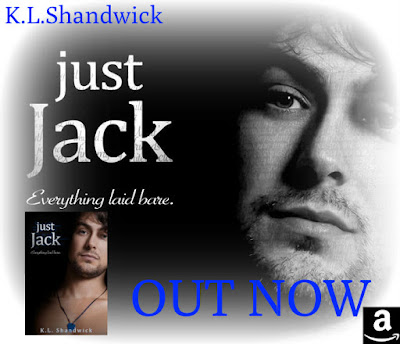 Rick cracked the door open and padded through it hacking a cough and reaching for the mini-bar. “Mornin’ Lothario.” He croaked in my direction without making eye contact, reading the labels.
Chuckling loudly, there was just no way I was going to live down that after party Mark was talking about, but when I took in the sight of him I couldn’t help but throw a come-back at him.
Did your mother send you that get up, or are the pyjamas supposed to turn the women in your room off enough to leave?”
Rick looked down and smirked at the wine coloured paisley patterned silk pyjama bottoms he was wearing.
Waving his hand at the chair for me to sit down he pulled a glass and poured himself a miniature of gin and a small bottle of tonic water into it. “Long story.”
“Can’t wait.” My hurried comment was followed up with a wide grin as I settled back in the chair with one leg crossed over the other, my ankle resting on my knee.
“Allergy. I’ve got a rash from the starch on the hotel sheets the other night.”
As soon as he said that I knew he was going to regret it and I could see from the startled look on his face he’d been caught off guard and didn’t mean to be so open about it. He knew he’d walked right into something that I’d use against him, even if I was managing to keep my face straight.
“A rash?” I couldn’t keep the humour out of my voice, and there was even the hint of a breakthrough giggle in those two words.
Rick stared pointedly at me as if to say, “Laugh and tear you a new one,” but my sense of humour just overrode any potential fall-out consequences he may have been planning.
“That’s a bit like saying I got pregnant from the sheets, Rick. Don’t you think you’re more likely to have caught something from one of the women in your bed than the sheets? Or don’t you want to believe that just in case you get pussy-fright?
Rick threw the lid of the gin bottle at me and it bounced off my forehead but by that time I was chuckling loudly. “Laugh all you want, I’m allergic to starch. So they got me these from the hotel store because I needed something to make sure I was protected in bed. It was fucking murder trying to play with the itch in my pants the night before last.”
“Most guys wear condoms for protection, Rick not theatrical pyjamas.”
Rick was being deadly serious but the more he spoke the more uncontrollable my laughing became until he stood up and pulled them down to show me the red welts on his legs, his dick at eye level with me. Just as he did this, the door opened and the two girls he had in his bed came through the door.
Turning my head to look at them, I was still stifling a grin. Rick was true to form and had two classic groupies for his sleepover, skinny girls with big tits, no bras, dyed blonde hair with black roots dressed in the usual rock-chick attire of leather mini-skirts, fishnet stockings and tight dark brown and cream t-shirts with the ‘Cobham Street’ motif on them.
“Sorry ladies, I was just about to part-take would either of you like to join me?”
My quip was out before I’d even thought about it. Hell, I was probably going to be sacked after this, but I grinned widely and Rick smacked me around the head, making me cry out— partly in surprise, partly out of pain.
“You’re such a smart ass Jack Cunningham.” Pivoting the top half if his body in their direction he gestured at me with his hand, his pyjamas still at his ankles. “I was just showing him my rash.”
Laughing raucously I stared helplessly at Rick taking in his pathetic form with the patterned material draped around his feet and his dick dangling in front of him. As soon as I knew he felt the need to explain what was happening all of my professionalism suddenly deserted me and I was struggling to catch my breath, let alone stop laughing. The skinnier one of the girls gave a loud snort, then her resolve was gone and she joined in laughing, but I think she was laughing because mine was so infectious more than anything else.
Rick continued protesting his innocence when suddenly the second girl who had been standing staring deadpan erupted in the oddest hee-haw laugh I’ve ever heard in my life. The look on Rick’s face was a picture as he gawped in disbelief with his jaw open taking in all of us laughing hysterically at his expense. I was sure he was going react badly, but even at that I just couldn’t get it together at all.
Rick bent down and pulled his pyjamas up, which I found even funnier for no particular reason and this set off a fresh bout of laughter. Striding over to open the door, Rick waved a finger in the direction of the two women and Jed made short work of evacuating them from the scene. All I could do was watch helplessly because I couldn’t get my laughing fit under control, and I was sure I was going to be next to be thrown out, but probably via the roof terrace.
Closing the door again, Rick bent forward, his hands on his knees and he suddenly cracked up with laughter. “Jack fucking Cunningham, I should bury my size eleven up your ass for what just happened there, and I don’t understand why I can’t…I fucking love you, dude. You have no idea what a breath of fresh air you are in a world full of ‘yes men’. How the fuck have you been?”
KLShandwick just Jack 2015© 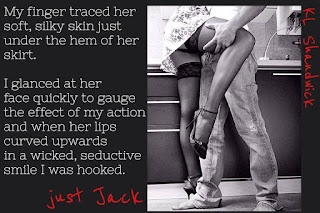 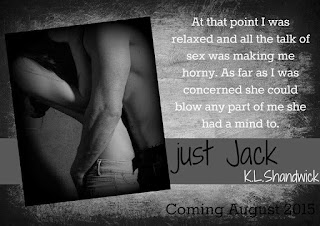 K. L. Shandwick lives on the outskirts of London. She started writing after a challenge by a friend when she commented on a book she read. The result of this was "The Everything Trilogy." Her background has been mainly in the health and social care sector in the U.K. She is still currently a freelance or self- employed professional in this field. Her books tend to focus on the relationships of the main characters. Writing is a form of escapism for her and she is just as excited to find out where her characters take her as she is when she reads another author's work.