WHOOP!! SURPRISE!! Tillie Cole has been working on this secret project to give us #darkromance lovers more of her infamous #HadesHangmen
PRE-ORDER NOW so on April 23rd this baby will be on your bookshelf ready to go!! 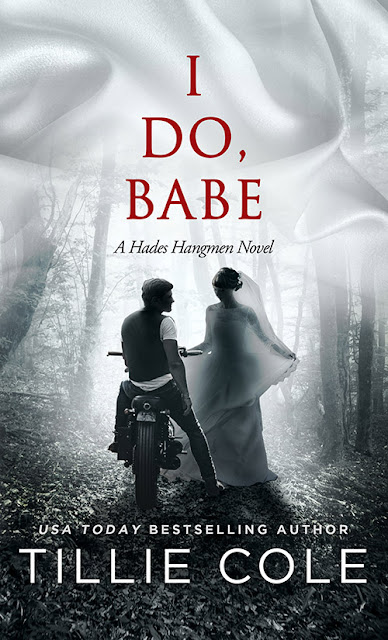 Pre-order for only 99c


WHEN DARKNESS AND LIGHT COMBINE, DESTINED SOULS WILL IGNITE . . . Connected since childhood.Two souls: one dark and one pure.Bracing to take the greatest step of all. River ‘Styx’ Nash loves his woman. Ever since he met Mae at the fence of the cult that had kept her captive as a child, he has never loved anyone else. He loves her black hair, her pale skin and of course, her ice-blue ‘wolf eyes’. Since Mae came crashing back into his life, his only wish has been to marry her; finally to make her his wife. But now the wedding is booked, and only weeks from forever having Mae by his side, a lifelong problem is plaguing him.He wants to marry her; he has never wanted anything more . . .. . . if only he could speak the words and declare it to the world. Salome ‘Mae’ Nash’s life had been filled with heartache and pain . . . until, at age eight, she met a strange dark-haired boy from the outside world. Years later, and reunited with her great love, Mae is ready to solder her heart to his. Finally, Mae is getting ready to marry her man. But her fiancé has become withdrawn. Something is deeply troubling him.But Mae has no idea what.Or what to do to help. Can Styx open up and conquer his deepest pain? Or will the infamous Hangmen Mute allow his fears to overcome his love for Mae and watch their much-anticipated wedding crumble to dust? Dark Contemporary Romance. Contains explicit sexual situations, offensive language and mature topics. Recommended for age 18 and over.***I Do, Babe: A Novella (Hades Hangmen #5.5) is to be read AFTER Damnable Grace (Hades Hangmen #5)***

Tillie Cole hails from a small town in the North-East of England. She grew up on a farm with her English mother, Scottish father and older sister and a multitude of rescue animals. As soon as she could, Tillie left her rural roots for the bright lights of the big city.After graduating from Newcastle University with a BA Hons in Religious Studies, Tillie followed her Professional Rugby player husband around the world for a decade, becoming a teacher in between and thoroughly enjoyed teaching High School students Social Studies before putting pen to paper, and finishing her first novel.Tillie has now settled in Austin, Texas, where she is finally able to sit down and write, throwing herself into fantasy worlds and the fabulous minds of her characters.Tillie is both an independent and traditionally published author, and writes many genres including: Contemporary Romance, Dark Romance, Young Adult and New Adult novels.When she is not writing, Tillie enjoys nothing more than curling up on her couch watching movies, drinking far too much coffee, while convincing herself that she really doesn’t need that extra square of chocolate.