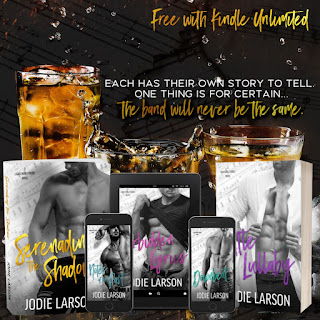 Check out Jodie Larson’s brand new covers for her Lightning Strikes Series and the reveal of Little Lullaby coming on Sept. 12th!
LIGHTNING STRIKES SERIES BLURB
Fame, fortune, and glory.
That’s the ultimate goal for any aspiring musician. Pay your dues to make your mark on the world. Get the contract, play the biggest stages. Be recognized for your talent.
For the Lightning Strikes, it was the dream.
Four best friends, a band of brothers, playing together since childhood. It didn’t matter where, whether it was garages, small bars, or even opening acts for bigger bands. All that mattered was the music. Nothing would stop them from getting everything they want.
What happens when love starts to find its way into the band? Is their goal still the same when four women enter their lives? From broken hearts to forbidden love, the guys fight to keep everything they have while wanting a new dream at the same time. Something they never saw coming.
Each has their own story to tell. One thing is for certain, the band will never be the same.
LIGHTNING STRIKES SERIES PURCHASE LINKS:
Serenading the Shadows: mybook.to/SerenadingTheShadowsNotes of the Past: mybook.to/NotesOfThePastForbidden Lyrics: mybook.to/ForbiddenLyricsDownbeat: mybook.to/Downbeat
LITTLE LULLABY BLURB
My closest friends are all in family mode. It’s like someone put a constant alarm on their biological clocks that won't stop ringing until an army of kids surrounds us all. Being the wives of rock stars, dealing with the spotlight, tours, and balancing time with their husbands, they have a lot on their plates. My only concern is when Gabe will be home from managing the bar.
Everyone keeps asking when we’re going to start trying. Our family. Our friends. At least my husband hasn’t joined in, but I see the look in his eyes every time someone says they’re pregnant.
He wants to start but I’m content on just practicing until the time is right.
Unfortunately, nothing ever works out the way you plan.
Two little lines. One scary adventure.
At least I won’t be alone.
After all, misery loves company.
ADD LITTLE LULLABY TO YOUR GOODREADS TBR:
Little Lullaby (Goodreads): https://bit.ly/LLJLGR 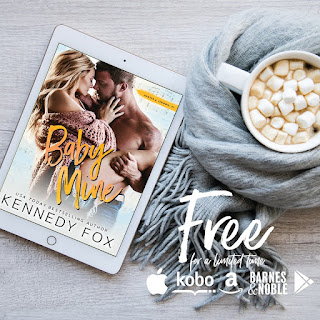 **All sales are subject to author and vendor approval and are in effect at the time of this posting. All Is Read LLC has no monetary obligations.**